Liverpool have several first-team players on the brink of their contracts coming to an end, one ex-Red wants to see Jude Bellingham arrive in their place.

Writing on his Instagram stories, Jose Enrique wrote about Naby Keita: ‘For me if good money come for him I would sell him and try to get [Jude] Bellingham’.

There have been some rumours linking our No.8 with a move to PSG and that has been something that many of our fans would be happy to see completed.

READ MORE: Ex-Red asks Liverpool fans to stop ‘treating Salah this way’ after reports of abuse being sent for not singing a new contract

If Jurgen Klopp was to receive an offer around £50 million, it would be interesting to see what the club choose to do in that position.

It does already look as though we are in the market for a midfielder and the extra money may help us to purchase a higher calibre of player.

With the English Borussia Dortmund midfielder though, it looks like any possible deal wouldn’t be completed until next summer. 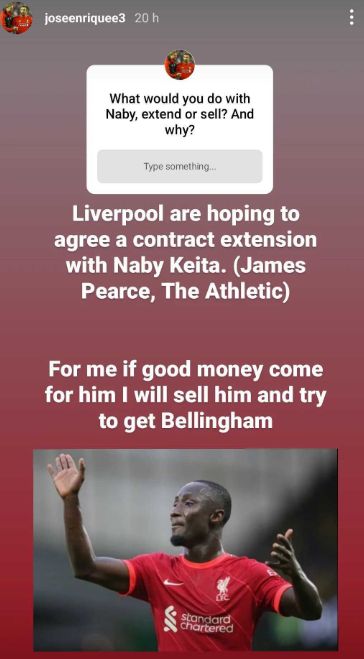