Erling Haaland has today been officially announced as a Manchester City player whilst Darwin Nunez is on the verge of completing his transfer from Benfica to Liverpool.

And despite the new Sky Blues forward arguably being the bigger name after proving himself in the Bundesliga in the last two years and netting 86 goals in 89 appearances during his time at Borussia Dortmund, 22-year-old Nunez actually has better statistics compared to the Norwegian in three key areas – including his minutes per goal rate.

Figures produced by the Telegraph (via CaughtOffside) express how impressive Nunez was for the Portuguese outfit last season, scoring more goals and having a better shot conversion rate compared to Haaland.

The Uruguay international made four more league appearances compared to the 21-year-old last term, but the statistics will certainly excite Liverpool fans with the forward expected to complete his move to the Reds this week.

READ MORE: Carragher warns Man City have just done something that’s a ‘worry for the rest of the Premier League

It’s expected that Jurgen Klopp’s side will pay Benfica an initial fee of £64m with £21m potentially in add-ons. He will also be offered a six-year-deal.

The former Almeria man netted 34 goals in 41 appearances for the Lisbon-based outfit last term, including two goals against the Reds in the quarter-final of the Champions League.

If (when) Nunez arrives at Anfield, he will replace Virgil van Dijk as Liverpool’s most expensive ever signing, surpassing the £75m that was paid to Southampton for the Dutchman back in 2018.

These figures will give Reds supporters a huge boost of confidence ahead of the new campaign that gets underway on July 30 when we face City in the Community Shield.

Both Haaland and Nunez appear to be strong and powerful forwards full of pace who will benefit from playing alongside world-class players.

Liverpool haven’t operated with an out-and-out striker for a number of seasons now, so Nunez’s arrival on Merseyside may lead to a potential change in tactics from Klopp, we’ll just have to wait and see.

You can see the chart comparing the stats of the two players below: 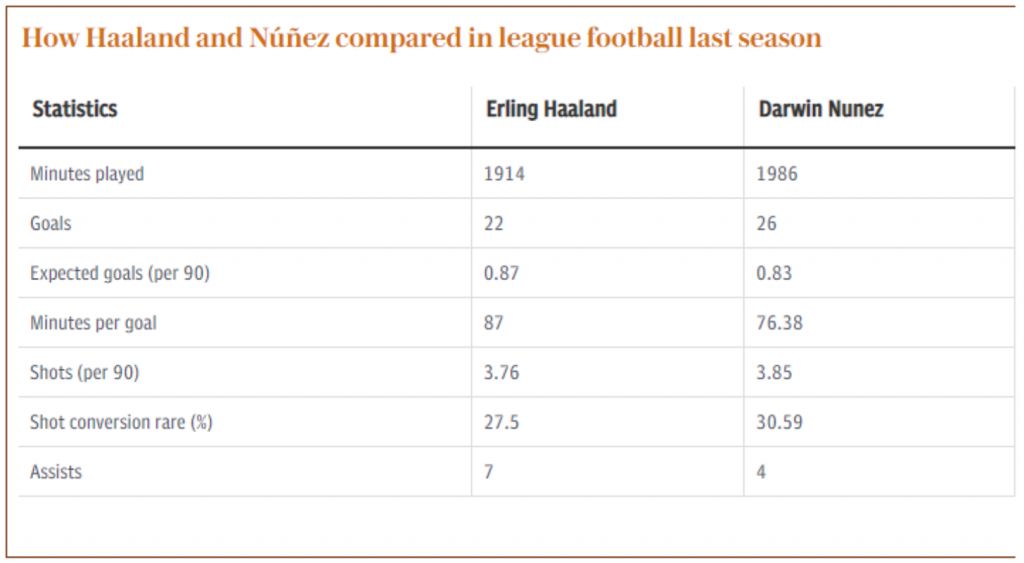