Liverpool look set to remain quiet towards the end of the transfer window yet one new signing has been ‘announced’ online but don’t get yourself too excited.

The Reds have been prior linked with a move for Matheus Nunes and this has lead to the oldest trick in the transfer rumour book, with his Wikipedia page being altered to say that he now plays for Jurgen Klopp.

At the time of writing, a simple Google of the Sporting Lisbon man’s name will further show this ‘confirmation’: 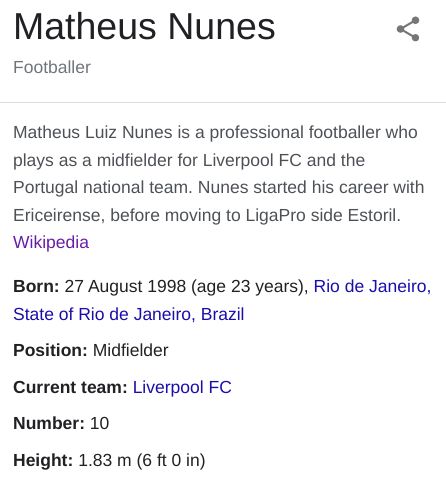 Not only have the meddling parties announced that the Brazilian-born midfielder now calls Anfield his new home but have also ‘confirmed’ that he is set to take the No.10 shirt.

The 23-year-old may still join our club this summer, or in an upcoming transfer window, but it’s safe to say that the most reliable source for this news won’t be his Wikipedia page.

Signing another player from the Portuguese league may end in more success for ourselves but for this Portugal international, we will have to wait and see what happens.

You can say what you like about the summer transfer window but it is certainly entertaining!

2 responses to “Matheus Nunes ‘announced’ as a Liverpool player and ‘handed’ the No.10 shirt online”