Trent Alexander-Arnold was handed his first minutes in this year’s World Cup as he came off the bench to aid England’s victory over Wales.

Our No.66 took to his Instagram account after the game and posted the simple message: ‘Knockouts baby 🏴󠁧󠁢󠁥󠁮󠁧󠁿😁’.

He may have been given just 30 minutes of football by Gareth Southgate but our No.66 was quickly involved in the game and helped provide a pre-assist for Marcus Rashford’s second goal of the evening.

With Jordan Henderson also starting the match, Liverpool supporters were given the opportunity to watch both of Jurgen Klopp’s players play in the game and it was a positive performance from both men too.

With Virgil van Dijk, Alisson Becker, Fabinho and Ibou Konate already booking their place in the knockout rounds, alongside the two Englishmen, it’s now on to Darwin Nunez to join them.

The Scouser in our team is unlikely to be handed any more minutes in this competition unless there are injuries in the squad, but he can at least say he’s taken part in his second World Cup.

Let’s hope that our No.3 can get onto the pitch at some point too, so that all the Reds have taken part in this tournament. 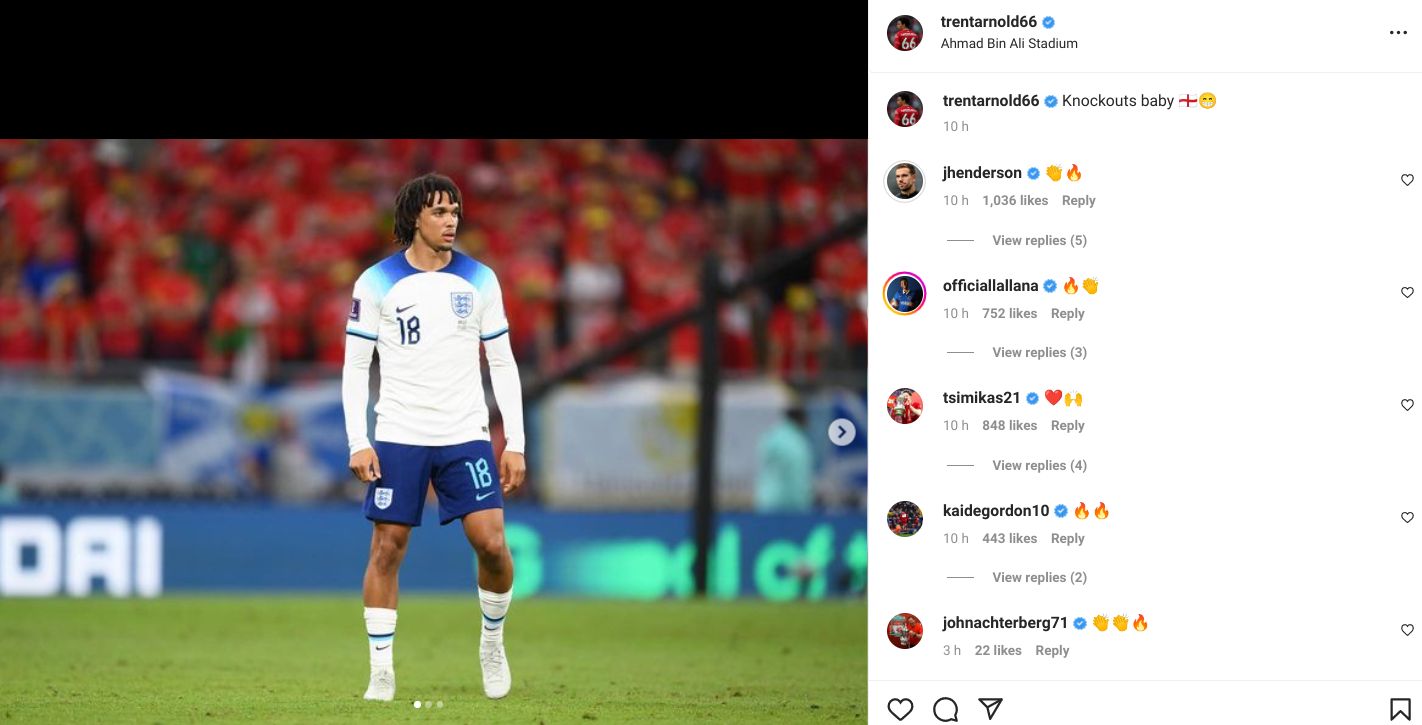 Football News 24/7
(Video) Trent turns defensive saviour with off the line clearance v Brighton
January 29, 2023 14:04
Former PL manager urges Jurgen Klopp to try 24-year-old Liverpool star in midfield role
January 27, 2023 19:22
Robertson labels Liverpool teammate ‘an absolute disgrace’ because of what he did at his wedding
January 25, 2023 16:46
Robertson on the five different leaders within the Liverpool dressing room
January 25, 2023 15:44
What Trent did on LFC bench right after Chelsea offside goal speaks volumes
January 21, 2023 13:01
(Video) “Lighting up that pitch, not only with his touch but with his smile” – Alexander-Arnold’s hilarious Firmino commentary
January 20, 2023 9:47
(Video) Alexander-Arnold and Rashford’s offsides compared as rule is debated for lack of consistency
January 16, 2023 10:45
Liverpool’s performance at Brighton was ‘completely unacceptable’ and can be used as ‘motivation’, says Trent Alexander-Arnold
January 15, 2023 14:31
Trent Alexander-Arnold makes promise to Liverpool fans after shambolic Brighton performance
January 15, 2023 7:41
Trent Alexander-Arnold backs Darwin Nunez to come good and discusses the impact of Sadio Mane’s departure on the Liverpool squad
January 13, 2023 13:43