Cody Gakpo became the 11th player to be handed the No.18 shirt and the 11th Dutchman to sign for Liverpool once his transfer from PSV was confirmed and he clearly has excited some of his fellow countrymen.

Once the club announced the signing on their Instagram account, two former Reds were quick to send a message to our new striker with Ryan Babel first writing: ‘👑’ and this was followed by Sander Westerveld who said: ‘Welcome to the family, Cody!❤️ good luck and enjoy the ride! YNWA 🙏🏻’.

It’s great to see that the 23-year-old already has so much support from those who he can surely seek advice from if needed and with Virgil van Dijk already at the club, he has even more advice that he can learn from.

READ MORE: (Video) Gakpo’s shirt number revealed and the significance behind his selection

If you want to ask the quiz question yourself, the 10 other players from the Netherlands who have played for the Reds are: Ryan Babel, Ki-Jana Hoever, Jan Kromkamp, Dirk Kuyt, Erik Meijer, Sepp van den Berg, Virgil Van Dijk, Sander Westerveld, Georginio Wijnaldum and Bolo Zenden.

There’s certainly a fair amount of medals that have been worn by the previous men to have signed for the club and the former PSV attacker will be hoping to win his fair share of silverware whilst at Anfield.

Let’s hope that the Dutch legacy can continue and that our new No.18 can become a key member of Jurgen Klopp’s star-studded squad.

You can view Babel and Westerveld’s messages to Gakpo via @codymathesgakpo on Instagram: 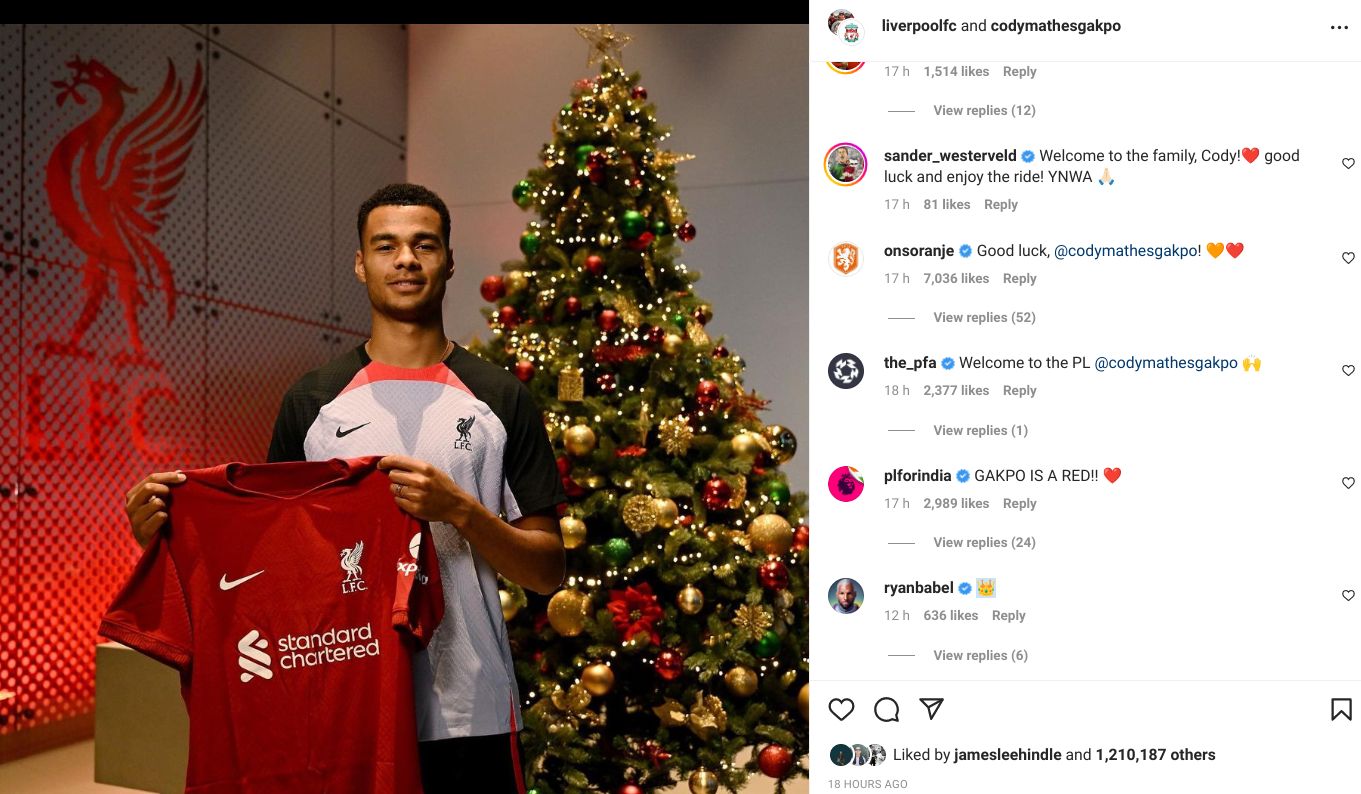 Football News 24/7
Former Dutch international ‘confident’ that Cody Gakpo will soon be showing what he’s capable of at Liverpool
February 2, 2023 10:40
Ex-Red labels Liverpool signing a ‘complete shambles’ in transfer comparison
February 2, 2023 8:33
BBC pundit would ‘rather see’ Gakpo play on the left-wing instead of central position Klopp is using him in
February 1, 2023 16:47
‘When you look at him’ – Robbie Fowler has noticed something ‘remarkable’ about Cody Gakpo
February 1, 2023 15:20
(Video) Gakpo’s highlights against Brighton shows how he’s growing into his new role at Liverpool
February 1, 2023 9:47
How Gakpo ‘changed the plan’ for Klopp’s transfer ideas of strengthening the midfield – report
January 31, 2023 15:37
Liverpool have finally answered Firmino question but it could cost them midfield solution – opinion
January 30, 2023 19:55
“I am trying…” – Cody Gakpo opens up how he’s working to ‘adapt’ to life in Liverpool
January 28, 2023 16:48
(Video) Klopp on ‘outstanding’ Gakpo and why he’s ‘really what we need’ at the moment
January 28, 2023 8:14
Editor’s Column: First impressions of Cody Gakpo
January 23, 2023 14:38