Liverpool and Southampton fans have been scrapping on Twitter today after it was discovered that Dejan Lovren, who left the Saints for us for £20m in 2014, has deactivated his social media accounts.

Southampton supporters, who’ve bullied the Croat relentlessly since he pushed for a move, celebrated the victory, while Reds claimed some of the comments they’d left were completely uncalled for. 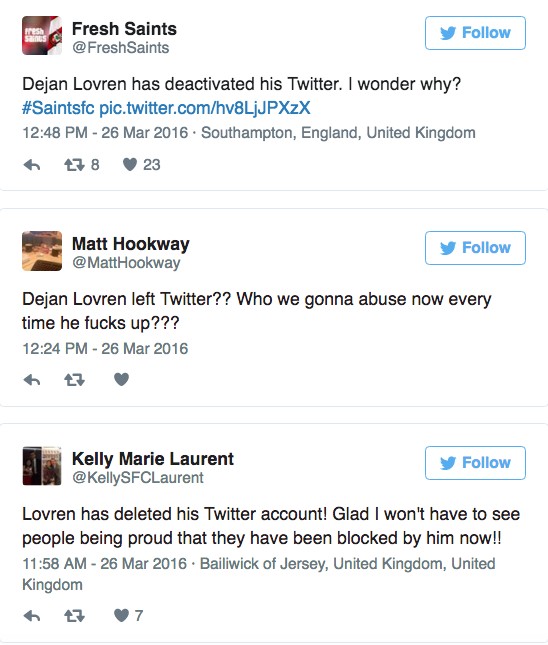 Dejan Lovren has deleted his Twitter after Southampton fans sent him death threats and made disgusting comments about his children. Classy.

Southampton fans who abused Lovren; I bet you all feel so big making a player deactivate by threatening him and his family

So it appears Lovren has deactivated his twitter due to incessant abuse from Southampton fans. Hope they’re proud. Bit pathetic really.

HOWEVER… We don’t think it’s fair to suggest Southampton are solely to blame. Before his run of good form, the Croat was consistently abused online by our own supporters, it’s sad to say.

Regularly he was tagged in messages asking him to leave by our own fans, and the only surprise is that he didn’t deactivate sooner.

Perhaps this should be a lesson to those who recklessly vent fury online. It can do damage to your own.

You just have to read replies to Raheem Sterling’s social media posts (some of which are horrible, racist and downright illegal) to know that Liverpool fans are as guilty as anyone else in this respect.